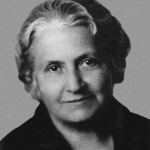 Maria Montessori was a scientist and educator from the early 20th century. The first ever woman in Italy to earn a degree in medicine, she devoted her life to observing children and developing a compelling teaching method.

According to Maria Montessori, children are experimenters by nature, explorers of their environment and courageous workers: “curious about everything, capable of extraordinary concentration and ready to absorb everything, the way sponges soak up water.” Source: © Nicolas WAPLER – September 2007.

Maria Montessori was born in 1870 in Italy in an upper class family. Given a very strict upbringing by a father who was an army officer, she was very close to her mother, who respected her freedom. Her family wanted Maria to become a teacher, but after entering a technical college for boys, she discovered biology and was set on becoming a physician.

At the age of 26, she became Italy’s first ever woman doctor. For nearly a dozen years, she worked on psychiatry with children termed as “mental”. It was then that she discovered that they could be given very considerable help through education. By dint of an extraordinary amount of work, she developed a method that enabled some of these children to pass exams just as easily as children deemed to be “normal”.

In 1901, she began to take an interest in children who had no particular problem. And she enrolled for studies in psychology and philosophy.

In 1907, Maria Montessori opened her first “Children’s House” in a building in the popular quarter of San Lorenzo. The house was to become a laboratory for experimentation where Maria Montessori built and tested her method. She discovered that children, from birth to the age of 6, possess rare sensitivity and mental strength, capable of assimilating and learning from their environment. She observed that this was the period when children were most receptive to learning. Other Children’s Houses were created in Italy and Maria Montessori found herself having to train a considerable number of teachers.

She began by writing books about her work. Establishments opened in Europe and in the United States. In 1929, she founded the Montessori International Association, whose objectives were to spread and promote her principles of teaching.

Fleeing fascism, she left Italy for Spain, then England and finally the Netherlands. From 1939 to 1950, she went to live in India to get away from the war. She met  Nehru Gandhi and Tagore and created a large number of schools. In 1952, she returned to Europe and settled in the Netherlands, where she died at the age of 82.

There are now around 20,000 Montessori schools around the world, ranging from nursery schools to universities. In France there are about a hundred schools and a large number of projects in the pipeline.